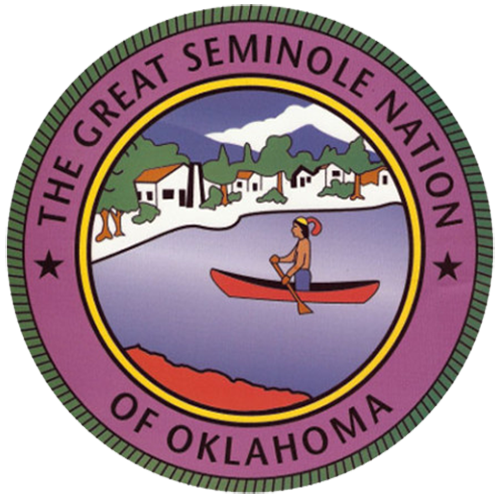 Formation Of The Seminole Nation In Oklahoma:

Formation Of The Seminole Nation In Oklahoma:

The Seminoles, under the leadership of Chief John Jumper, moved to their new nation and established a community known as the Green Head Prairie. A council house was located about two miles north and two miles west of the agency. After this settlement was made and the homes were well established, the War between the States erupted and the Seminoles as well as other members of the Five Civilized Tribes (Cherokee, Choctaw, Chickasaw, & Muskogee Creek), took up arms and fought one against the other.

Under the agreement made with the Federal government, the Seminoles were to be protected from outside invasion, but with the rumors of war, and before any battles were fought, the Government withdrew all of its forces, leaving the Indian Nations unprotected from invasion from the South.

About one-third of the Tribe, under the leadership of Big John Chupco, voted to remain loyal to the Union and they proceeded to move to Kansas. The first skirmishes of the war took place when these Seminoles, along with other tribal members, who favored the North, fought three engagements to reach help in Kansas.

The remainder of the Seminoles under John Jumper, joined forces with the Confederacy and with civilians living in camps south of the Red River in Texas. The soldiers, with Colonel Jumper as their leader, fought under the command of General Stan Watie.

The war devastated Indian Territory and when it came to an end the Five Civilized Tribes were forced to give up their claim to all their land in the western half of what is now Oklahoma.

In 1866, the Seminoles were required to sign a new treaty. This treaty made certain provisions that included the sale of all the Seminole Nation to the United States at the rate of 15 cents per acre; to free their slaves and give them tribal rights; to give rights of way to the railroads; to make peace among themselves and with other tribes; to help organize a state made up of the Indians in Oklahoma; and the Seminoles were allowed to buy land sold by the Muscogee Creeks for a price of 50 cents per acre. This new land was the Second Seminole Nation and existed from 1866 to 1907. This consisted of present day Seminole County with the addition of 175,000 acres that the Seminoles later bought from the Muscogee Creeks.

With the signing of the Treaty in 1866, the Government commissioned Elijah Brown to bring the Northern Seminoles back to their new nation and set up a new capital city. He chose as the site for the new capital, the present city of Wewoka. 17 years earlier, a Freedman leader, Gopher John, had made a temporary settlement on the north bank of the Wewoka Creek. They had given the name Wewoka, "Barking Water", to the settlement because of the noise made by the small falls located just east of the settlement.

In 1866, a trading post was built, and in 1867, the first Post Office was commissioned with Elijah Brown named as the Post-Master.

Tribal Government:
This was a period of adjustment and as both north and south factions of the tribe returned to this settlement, there was some friction at first. The Government recognized Big John Chupco as the Chief of the Seminoles, although the majority of the tribe followed the leadership of John Jumper. As soon as the Tribe was allowed to elect its own chief, John Jumper became the Chief. Chief Jumper had organized the Spring Baptist Church and felt he needed to spend his time in church work, so he resigned as Chief and his son-in-law, John F. Brown was elected Chief. Governor Brown, as he was called by the Tribal members, was the son of Dr. John Frippo Brown who had served as the Tribal physician on the move from Florida. Upon arriving in Indian Territory, Dr. John Brown married a Seminole girl, Lucy Graybeard, and John F. Brown was the oldest child of their marriage. Governor Brown was well educated aand was successful in keeping the peace within the Tribe and thhe Seminoles began to enjoy a period of peace and prosperity.

The Government of the Seminoles was built upon the traditional form that had been used in the tribe for generations. Each band elected representatives to serve on the Seminole council. In Florida, the total number of bands was 35 but after the move, this had been reduced to 25. After the Civil War, the bands were continually reduced until there were only 14 by statehood. The Council selected two of its members as candidates for Chief and upon the day of election, the two candidates would take their place in the main street of Wewoka and the legal voters would line up behind their choice of candidates. The one who had the most in his line was elected Chief for four years.

Education:
The first school founded among the Seminoles was established in 1843 and was called Oak Ridge Mission. This school was sponsored by the Presbyterian Church. The leader of this school was John Bemo, a young Seminole man who was the nephew of the Florida war Chief, Osceola. This school was abandoned before the Civil War and was replaced by another school called Ramsey Mission, located three miles north of Wewoka. In 1880, a school for girls was founded about three miles west of the present town of Sasakwa. In 1892, a boy's school was built three miles south and two miles west of the present city of Seminole. This school was known as the Mekusukey Mission for Boys. In 1893, the Sasakwa Girls school was united with a new girls' boarding school called Emahaka Mission, located five miles south of Wewoka.

Seminole Nation of Oklahoma:
The Seminoles are a very proud people, devoted to their heritage and traditions. They believe strongly in their culture, which is displayed in many ways, including Stomp Dances Art, Storytelling, Music, and the devotion to their loved ones who pass on.

The original Muscogee language is still spoken by many Seminole elders, but is slowly fading away, possibly due to the younger generation's lack of interest in the language. However, this may change as efforts are being made to implement the language into the public school system, where it can be learned by young children.

Political Culture:
The Seminole Tribe of Oklahoma consists of fourteen individual bands or groups, two of which are Freedmen bands (descendants of slaves who found refuge and freedom with the tribe before the tribe's removal from Florida).

Individuals are inherited into their respective band through their mother (they must be a member of the band their mother belonged to). Each band has an elected Chairman and Vice Chairman. Each band meets once a month to discuss tribal matters of importance.

All final decisions regarding the tribe (economic development, social programs, activities, employment opportunities, etc.) are the responsibility of the General Council, the governing body of the Seminole Nation. The General Council consists of two representatives of each band, who are elected by vote of the members of their band. The General Council holds quarterly meetings to discuss matters and vote on matters that need their approval or disapproval. Special meetings are called if a decision is needed right away.

Religion And Schools:
The Seminole Nation is divided into two religions, Christianity and Traditional. Christianity is the acceptance of Jesus Christ and the development of his teachings into our daily lives. There are several Seminole Indian churches in our area for worship.

Traditional religion is the stomp dance. The stomp dance is derived from the Green Corn Dance, which was brought over by the Five Civilized Tribes during their removal from Florida.

Seminole children attend public schools where efforts are being made to bring more Indian culture and language in the schools.

Geographical Location & Population:
The Seminole Nation boundaries include areas scattered throughout Seminole County, one of the most economically depressed counties in Oklahoma. The tribal headquarters are located at Wewoka (meaning Barking Waters), which is the county seat of Seminole County.

The Seminole Nation currently has around 12,000 enrolled tribal members, which about 60 percent live within or near the Seminole nation boundaries. Except for about 700 not living in Oklahoma, the remainder live in other parts of the state.