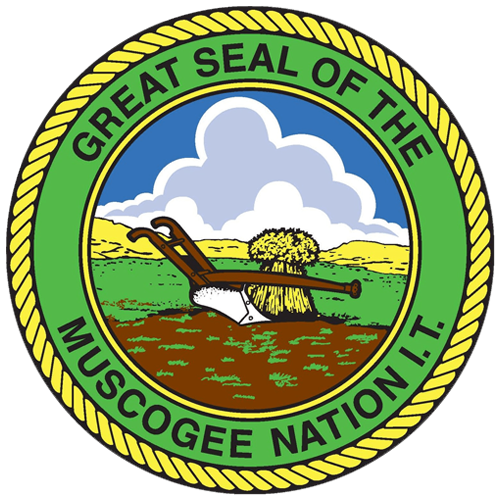 The Muscogee people are descendents of a remarkable culture that, before 1500 AD, spanned all the region known today as the Southeastern United States. Early ancestors of the Muscogee constructed magnificent earthen pyramids along the rivers of the this region as part of their elaborate ceremonial complexes. The historic Muscogee later built expansive towns within these same broad river valleys in the present states of Alabama, Georgia, Florida and South Carolina.

The Muscogee were not one tribe but a union of several. This union evolved into a confederacy that, in the Euro-American described "historic period," was the most sophisticated political organization north of Mexico. Member tribes were called tribal towns. Within this political structure, each tribal town maintained political autonomy and distinct land holdings.

Throughout the period of contact with Europeans, most of the Muscogee population was concentrated into two geographical areas. The English called the Muscogee peoples occupying the towns on the Coosa and the Tallapoosa rivers, Upper Creeks, and those to the southeast, on the Chattahoochee and Flint rivers, the Lower Creeks. The distinction was purely geographical. Due in part to their proximity to the English, the Lower towns were substantially effected by intermarriage and its consequent impact on their political and social order. The Upper towns remained less effected by European influences and continued to maintain distinctly traditional political and social institutions.

In the early 19th century, the United States Indian policy focused on the removal of the Muscogee and the other Southeastern tribes to areas beyond the Mississippi River. In the removal treaty of 1832, Muscogee leadership exchanged the last of the cherished Muscogee ancestral homelands for new lands in Indian Territory (Oklahoma). Many of the Lower Muscogee had settled in the new homeland after the treaty of Washington in 1827. But for the majority of Muscogee people the process of severing ties to a land they felt so much a part of proved impossible. The U.S. Army enforced the removal of more than 20,000 Muscogee to Indian Territory in 1836 and 37.

In the new nation the Lower Muscogees located their farms and plantations on the Arkansas and Verdigris rivers. The Upper Muscogees re-established their ancient towns on the Canadian River and its northern branches. The tribal towns of both groups continued to send representatives to a National Council which met near High Springs. The Muscogee Nation as a whole began to experience a new prosperity.

The American Civil War was disastrous for the Muscogee people. The first three battles of the war in Indian Territory occurred when Confederate forces attacked a large of neutral Muscogee led by Opothle Yahola. For the majority of the Muscogee people, desired neutrality proved impossible. Eventually Muscogee citizens fought on both the Union and Confederate sides. The reconstruction treaty of 1866 required the cession of 3.2 million acres -- approximately half of the Muscogee domain.

In 1867, the Muscogee people adopted a written constitution that provided for a Principal Chief and a Second Chief, a judicial branch and a bicameral legislature composed of a House of Kings and a House of Warriors. Representation in both houses of this Legislative assembly was determined by tribal town. This "constitutional" period lasted for the remainder of the 19thcentury. A new capital was established in 1867 on the Deep Fork of the Canadian at Okmulgee. In 1878 the Nation constructed a familiar native stone Council House which remains at the center of the modern city of Okmulgee.

In the late 1800s the Dawes Commission began negotiating with the Muscogee Nation for the allotment of the national domain. In 1898, the United States Congress passed the Curtis Act which made the dismantling of the National governments of the Five Civilized Tribes and the allotment of collectively-held tribal domains inevitable. In 1890, the noted statesman Chitto Harjo helped lead organized opposition to the dissolution of Muscogee National government and allotment of collectively-held lands. In his efforts he epitomized the view of all Muscogee people that they possessed an inherent right to govern themselves. For individuals like Chitto Harjo it was unimaginable that the Nation could be dissolved by the action of a foreign government. This perception proved to be correct.

The end of the Muscogee Nation as envisioned by its architects within the United States Congress did not occur. In the early 20th century, the process of allotment of the National domain to individual citizens was completed. However, the perceived dismantling of the Muscogee government was never fully executed. The Nation maintained a Principal Chief throughout this stormy period.

In 1971, the Muscogee people, for the first time since the partial dismantling of their National government, freely elected a Principal Chief without Presidential approval. In the decade of the 1970s the leadership of the Muscogee Nation drafted and adopted a new constitution, revitalized the National Council and began the challenging process of Supreme Court decisions affirmed the Nation's sovereign rights to maintain a national court system and levy taxes. The federal courts have also consistently re-affirmed the Muscogee Nation's freedom from state jurisdiction.

In the 1990s, almost 100 years after the dark days of the allotment era, the Muscogee people are actively engaged in the process of accepting and asserting the rights and responsibilities of a sovereign nation. As a culturally distinct people the Muscogee are also aware of the necessity for knowing and understanding their extraordinary historical and cultural inheritance.